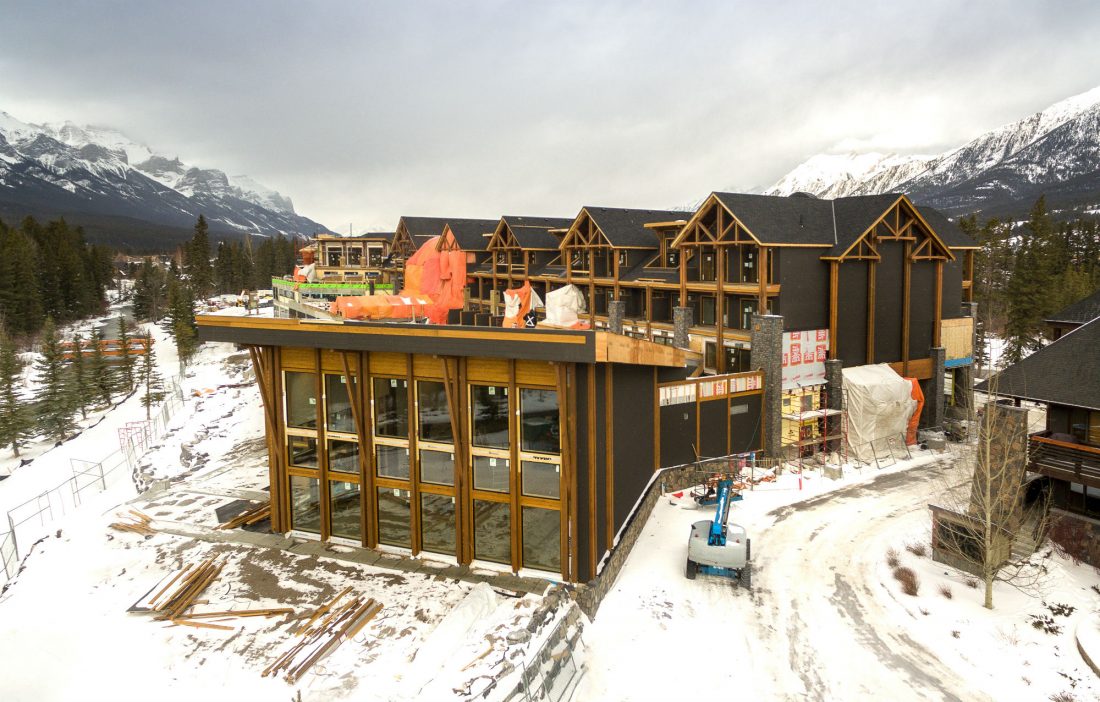 Canmore’s Malcolm Hotel contributes to economic growth as tourism to increase to $10.2 billion

Canmore, AB  – The Malcolm Hotel, located in Spring Creek, the heart of Canmore, is nearing completion and will open in Spring of this year. It is the first traditional hotel built in Canmore in 20 years.

Tourism is a key economic driver in Alberta and the new hotel is generating economic benefits as it meets the increasing number of tourists visiting the Canadian Rocky Mountains. Final touches are being completed on the hotel’s exterior right now.

The Malcolm Hotel is expected to staff more than 60 full-time and part-time employees, annually generating over $3.2 million in new salary and benefits. In addition to providing new job opportunities for locals, the luxury four-star hotel will contribute to the number of tourism dollars being spent within Canmore.

“Canmore is a highly sought-after tourist destination with minimal accommodation options for the increasing number of visitors,” explains Frank Kernick, developer of Spring Creek and owner of the Malcolm Hotel. “The Malcolm Hotel meets the demand and provides a luxury option for Canmore while the event centre will attract more visitors.”

In January 2018, Banff National Park reported a record setting eight months from April 1 until the end of November of 2017 when there was 3.1 million visits and a 3.7 per cent increase in traffic than during the same period in 2016. The Malcolm Hotel pays homage to the town’s unique history and legacy. The four-star luxury hotel’s ambience and design will reflect the royal decadence and heritage of past Scottish kings while encompassing an authentic, contemporary mountain feel. The hotel features 124 luxurious guest rooms and suites, a modern restaurant and lounge, 8,800 sq. ft. event space, a year-round outdoor heated pool, a general store and café.

The Malcolm Hotel will add a new luxury option for travelers whose interest in Canmore is making it one of the most popular places to visit in the Rockies. Luxury services include: 24-hour room service, valet parking and concierge.

Developed by Spring Creek Real Estate and managed Canmore specialist Clique Hospitality Management. Clique Hotel & Resorts was founded by Jim Muir, a Canmore resident and hotel consultant. Clique Hotel’s now operates six lodges in Canmore and two hotels in Calgary. Clique properties have all enjoyed number one rankings on TripAdvisor and continue to be the best performing hotels in the Canmore market.

According to the Canmore Business and Tourism’s 2015-2020 Strategic Plan, the 2020 target for the tourism sector is an annual visitor spend of $400 million (up from $278 million in 2012). Tourism in Alberta accounts for 54% of all visitors to Canada, taking in $8 billion annually while supporting over 19,000 businesses and employing more than 127,000 people.

The Town of Canmore reported the construction and development industry saw increased activity with a total building permits for 2017 reaching $116.5 million. 2017 is almost double 2016’s permit values. The largest historic building permit numbers are from 2007 when there $220 million. Spring Creek is a mountain neighbourhood comprised of homes for locals and vacationers of all ages, located within walking distance of downtown Canmore in the Canadian Rockies. Surrounded by mountain views, vast expanses of unspoiled wilderness and clear, glacier-fed rivers and streams, opportunities for outdoor adventure include world-class skiing, golf and fishing, hiking, biking and mountaineering.