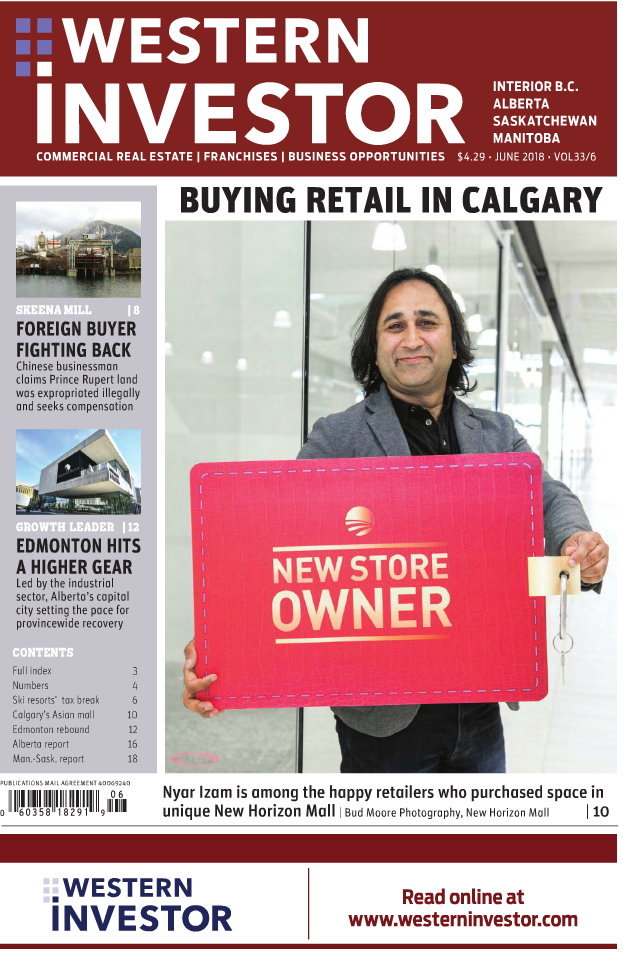 Western Investor Magazine gives New Horizon Mall and its impact on retail in Calgary the cover for its June Alberta edition.

New Horizon Mall sold space for approximately $1,000 per square foot, showing a fresh level of confidence and potential in Calgary

The stunning success of the first Calgary shopping centre to sell rather than lease space is evidence of the confidence and potential in a city that has been battling headwinds for four years.

New Horizon Mall in north Calgary welcomed its store owners in early May as owners received keys to their new stores. With more than 500 stores sold, New Horizon Mall was signing over 40 new businesses a day in May in the sold-out centre.

Developed by the Torgan Group and MPI Property Group, the Asian-themed New Horizon Mall is the first shopping mall in Alberta where each retail store is purchased outright. Stores may be owner-operated or purchased by an independent investor and leased to a retailer.

New Horizon Mall is Calgary and Alberta’s biggest new shopping centre, based on the number of businesses, and the second largest in the number of stores in Canada behind the West Edmonton Mall.

With a total of 320,000 square feet, New Horizon is much smaller than other destination shopping centres, though. The nearby CrossIron Mills, owned by Ivanhoe Cambridge, for instance, covers 1.17 million square feet of enclosed retail space.

New Horizon Mall is supporting investors and store owners with a business referral program, which connects investors with businesses interested in leasing space from New Horizon’s unit owners. Lease rates will vary among owners and location, but the average retail lease rate in north Calgary is from $25 to $40 per square foot annually, according to a Barclay Street Real Estate survey in the first quarter of this year.

As New Horizon opened, owners and entrepreneurs were on-site admiring their new business investment and preparing their stores to welcome customers. The mall’s official grand opening will occur once all shop fit-outs have been completed and retailers are ready to trade.

To learn more about New Horizon Mall, sign up here: