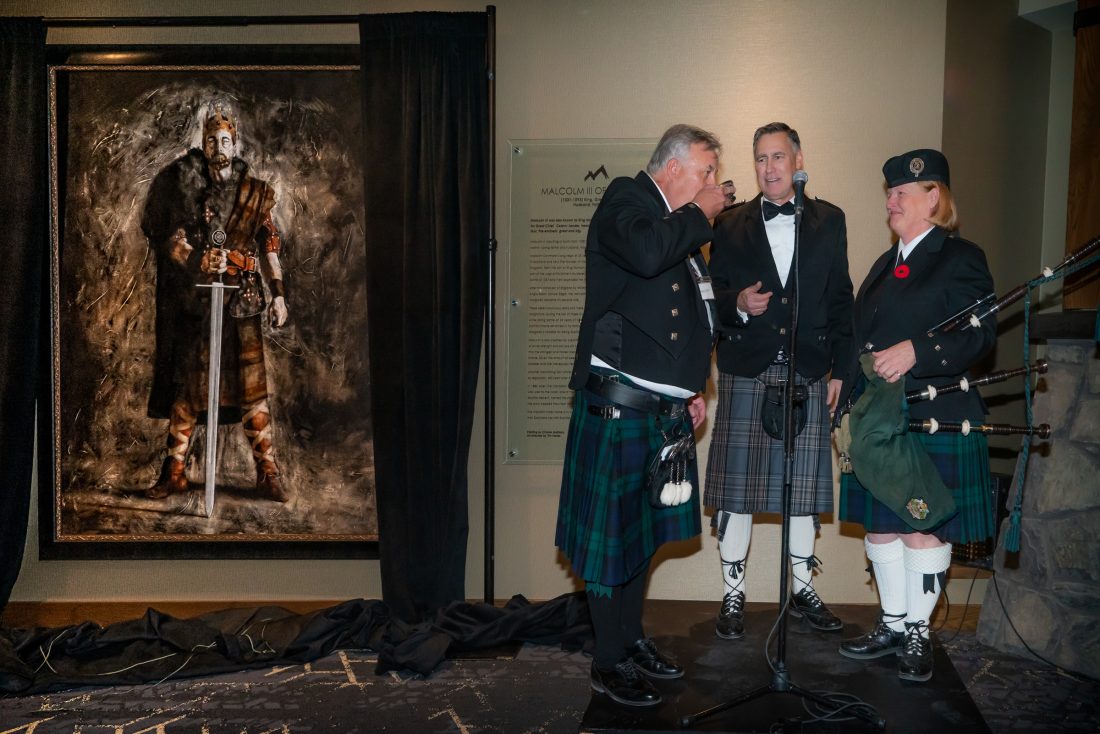 Canmore, Alta., The Malcolm Hotel and Event Centre, located in Spring Creek, the heart of Canmore, held its Grand Opening Gala on Saturday, November 3. It is the first four-star luxury hotel in Canmore and the first of three hotels being built in the Spring Creek community just off Main Street.

The luxury hotel literally rolled out the red carpet for its black-tie guests, who were piped into the grand lobby where they experienced an unveiling of the new portrait of King Malcolm III of Scotland, a hotel tour that featured caviar, smoked salmon, scotch-tasting, champagne and an evening Ceilidh, with black tie and kits, tartans, Highland dancers, contortionists and the Johnny McCuaig Band. “This is a pretty special moment,” says Frank Kernick, developer of Spring Creek, Canmore, who built and owns the hotel, “Canmore was named by an employee of Canadian Pacific Railway in 1884. CPR was the first in Canada to build luxury mountain hotels in the Canadian Rockies and now in 2018, Spring Creek is bringing the first four-star luxury hotel to Canmore.”

The Canmore name originates from a town on the northwest shores of Scotland named after King Malcom III of Scotland who reigned from 1058 to 1093. Canmore is the anglicized version of “Ceann Mór” which is Gaelic for ‘Great Chief’ or ‘Head’ which was the King’s nickname.

The hotel itself features 124 well-appointed rooms and suites, a fine-dining restaurant and lounge, and an 8,800-sq. ft. event space. It has 73 double queen rooms, 32 king rooms and 20 suites. Amenities include an elegant outdoor pool with panoramic views of the surrounding mountains from the second floor open-air mezzanine and fitness centre.

Developer Frank Kernick and his family have called Canmore home for three generations. Once a dairy farm and livery, the Spring Creek lands have been part of the Kernick family since 1927. In the 1950s, the family created Restwell, a popular campground, part of which operates today.

The Malcolm Hotel was developed by Spring Creek, and is operated by Canmore specialist Clique Hospitality Management. Clique Hotels & Resorts was founded by Jim Muir, a Canmore resident and hotel consultant. It now operates five lodges in Canmore and two hotels in Calgary. Clique properties have all enjoyed number one rankings on TripAdvisor and continue to be the best performing hotels in the Canmore market.

Tourism is a key economic driver in Alberta and the new hotel is already generating economic benefits as it meets the needs of an increasing number of tourists visiting the Canadian Rocky Mountains. The Malcolm Hotel is expected to staff more than 60 full-time and part-time employees, annually generating over $3.2 million in new salary and benefits. In addition to providing new job opportunities for locals the hotel will contribute to the number of tourism dollars spent in Canmore.

At the Grand Opening Gala, the Malcolm Hotel unveiled a large-scale portrait of King Malcolm III which it commissioned from Artist Charles Malinsky, who specializes in black and white figure representation. The portrait took five months to complete due to the research required to ensure the accuracy of clothing and weaponry.

“In the portrait, I wanted King Malcolm to be in his mid to late 40s at the peak of his physical prowess. In the image, he is defiant, confident, and has battle scars,” says Charles Malinsky. “I only work in black-and-white, as a medium for painting but I wanted to capture a historical aspect and introduced sepia tones to give the portrait depth and richness. The end result is a very dramatic and powerful expression of King Malcolm.”

The Malcolm Hotel is now open and taking reservations for overnight stays, weddings and conferences. It currently has Book Early and Putting on the Polish promotions offering 20 and 30 per cent discounts when booking a stay. Interested parties should go to www.malcolmhotel.ca for more details.

The Malcolm Hotel (hotelmalcolm.ca) is a $43 million hotel and event centre located in beautiful Spring Creek, Canmore and operated by Clique Hotels and Resorts. The Malcolm is the first traditional hotel built in Canmore in 20 years. Situated between two natural-flowing creeks, it features four-star service and hospitality, 124 well-appointed rooms and suites, luxury amenities and an 8,800-sq. ft. of event space. Amenities include an elegant outdoor pool with panoramic views of the surrounding mountains from the second-floor open-air mezzanine and fitness centre.