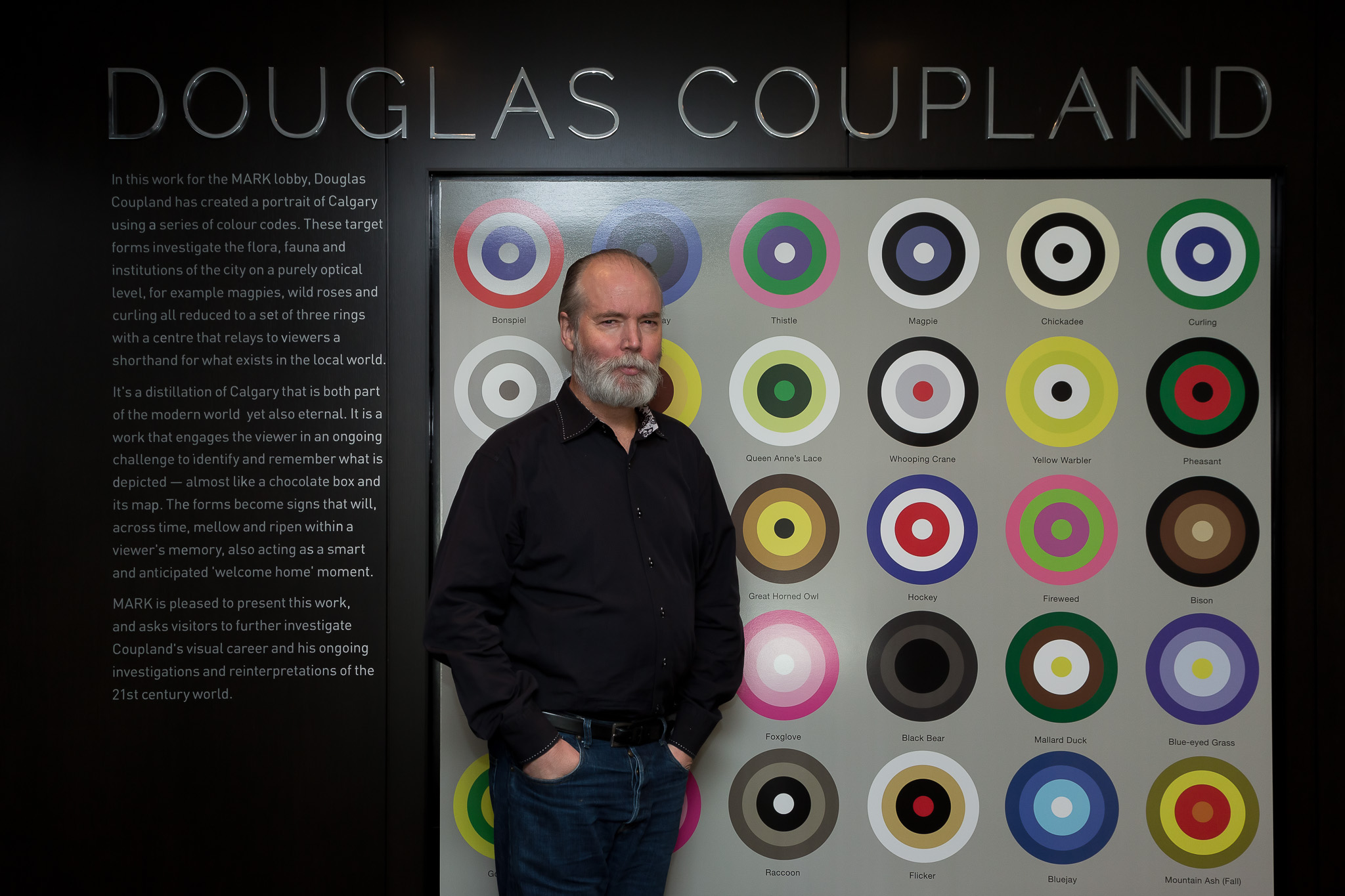 March 4, 2013 – World-renowned artist/author Douglas Coupland reveals his vision of Calgary for his 1st large-scale artwork in Alberta. Interpretation of Calgary, Alberta in the 21st Century is 4. 9 metres high and 4.1 metres wide and will be part of the Mark on 10th condo building being developed by Qualex-Landmark.

With Interpretation of Calgary, Alberta in the 21st Century Coupland has created a portrait of Calgary using a series of colour codes. These target forms investigate the flora, fauna and institutions of the city on a purely optical level, for example magpies, wild roses and curling all reduced to a set of three rings with a centre that relay to viewers a shorthand for what exists in the local world.

“It’s a distillation of Calgary that is both part of the modern world, yet also eternal,” say Doug Coupland of Interpretation of Calgary, Alberta in the 21st Century. “It is a work that engages the viewer in an ongoing challenge to identify and remember what is depicted — almost like a chocolate box and its map. The forms become signs that will, across time, mellow and ripen within a viewer’s memory, also acting as a smart and anticipated ‘welcome home’ moment.”

Douglas Coupland is an internationally renowned Canadian novelist, visual artist and designer. His work has been published in 30 countries and translated into 22 languages. His first novel in 1991 was Generation X: Tales for an Accelerated Culture. He has published thirteen novels, a collection of short stories, seven nonfiction books and a number of dramatic works and screenplays for film and television.
In 2001, Coupland began a visual practice that merges art with design, industrial design and text. While this is his first large-scale art commission in Alberta, other Coupland pieces include: Digital Orca in Vancouver, Monument to the War of 1812 near in Toronto and Group Portrait 1957 in Oshawa.

Developer Qualex-Landmark commissioned Coupland to do the artwork to participate in the emerging Design District around 10 Avenue SW in the beltline of Calgary’s downtown.

“Douglas Coupland has a very unique view of the world and his depiction of Calgary in this artwork is fascinating,” says Mohammed Esfahani, managing director, Qualex-Landmark. “The artistic element of the Design District makes this area of the city unique and popular. We want MARK on 10th to contribute to this uniqueness and are excited to be working with one of Canada’s most acclaimed artists.”
The Calgary Design District is the area of downtown between 10th Ave and 12th Ave South and 4th Street to 14th west. This area has always attracted architects, interior designers; furniture stores and galleries with its location near the heart of Calgary’s downtown. It is fast becoming one of Calgary’s most popular destinations. For a list of Art Galleries and Art exhibits located in Calgary’s Design District click here.

MARK on 10th, located at the corner of 8th Street and 10th Avenue SW, is Qualex-Landmark’s fifth residential development in Calgary’s Beltline District. MARK is a mixed-use high-rise tower offering one and two bedroom homes starting from the low $200’s. With its close proximity to downtown, universities, transportation, and entertainment districts it’s location offers all the perks of urban living.