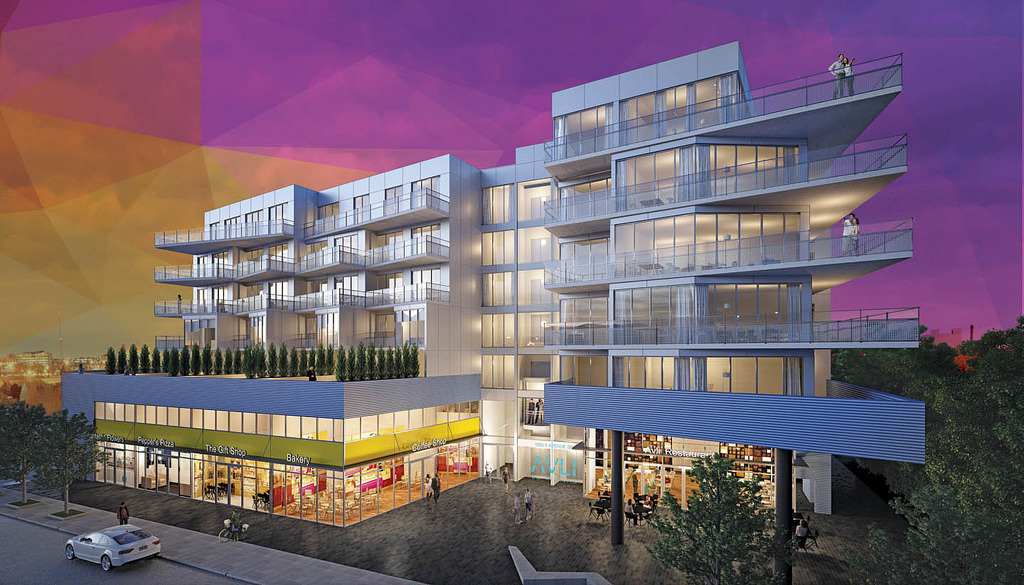 Calgary AB: Future residents of Inglewood’s newest condo are set to gain from a decade of improvements, as the area begins to experience the Green Line effect – the boost expected from the new Inglewood-Ramsey Light Rail Transit (LRT) station on 11th Street SE. This follows confirmation in May of the Federal Government’s $1.53 billion commitment, for stage 1 of the project.

In the center of this hotspot, AVLI on Atlantic hits a new architectural and interior standard for Inglewood, offering eclectic modern living while just across the street from major Calgary restaurants such as The Nash, boutique baker and grocery store Bite, and the Esker Foundation, one of many local art galleries.

“Our brief on the design of AVLI on Atlantic was that it needed to be a work of art itself in order to fit with Inglewood’s art scene,” said Brian Kernick, president of Greenview Developments. “We’re in the process of achieving that and it’s proving popular with buyers and while 75% of homes are sold, there are still homes to choose from condo within the building”.

‘The Green Line’ is expected to have a positive kick of up to 19% on real estate prices*, once the infrastructure is completed in 2026 according to insights from a report by QFREB on ‘The effect of proximity to public transit on property values’. The service will be an important piece of Calgary’s transit network, adding 28 stations and 46 kilometers of track to the existing 45 stations and 59 kilometer LRT system. End-to-end, the service will connect the Northern Hills communities and Seton to downtown. Inglewood-Ramsey will be just a few stops from downtown. According to Statistics Canada, ever more homeowners are choosing to live in condominiums – 1.9 million Canadians live in a condo, and over 20% of these are Calgarians** – many seeking a different kind of urban, environmentally aware lifestyle, that values the benefits of transit.

“The new infrastructure plan is an excellent initiative for Inglewood and Calgary in general,” said Kernick. “We have a lot of homeowners who are downtown working professionals, so this will be a great option to commute to work without the hassle that driving downtown presents.”

“Cars are increasingly just one of the travel options for people here. LRT creates new commuting and visiting patterns, especially as the Green Line will feature interchange points along the route – and an eventual link to the airport.”

“With condo bike storage and repair workshop amenities built into its design, AVLI on Atlantic gives Calgarians old and young lots of ways to get around – and the confidence that comes from investing in an area receiving a major infrastructure boost,” Kernick adds.

New infrastructure and neighbourhood connectivity are key to Inglewood’s and Calgary’s metropolitan future. It is what makes other cities like New York (most walkable city 2017 in the USA, Canada and Australia) and Vancouver (most walkable city in Canada) major hubs. Walkable neighbourhoods allow communities to become more efficient and improve their quality of life through a better environment, health, and economy.

Homes at AVLI on Atlantic start in the low $300s. The majority of AVLI‘s floor plans are custom and range in size from 545 sq.ft. to 2,200 sq.ft. The development offers a unique mix of one and two bedroom units (plus den) and offers four live-work homes and seven penthouse suites.

The stylish condo project will also feature a $5 million retail space on the ground floor. Building owners and Inglewood residents will have a range of new shops to enjoy with the five retail units AVLI will provide on its ground floor. The units are currently for lease and range in size from 1,044 sq.ft. to 5,230 sq.ft.

* ‘likely increase in home value by up to 19 per cent’ QFREB, A word from the Economist Report – THE EFFECT OF PROXIMITY TO PUBLIC TRANSIT ON PROPERTY VALUES

**1.9 million Canadians living in condos and over 20% of those being Calgarians’, Canadian Statistics 2016, Census Report