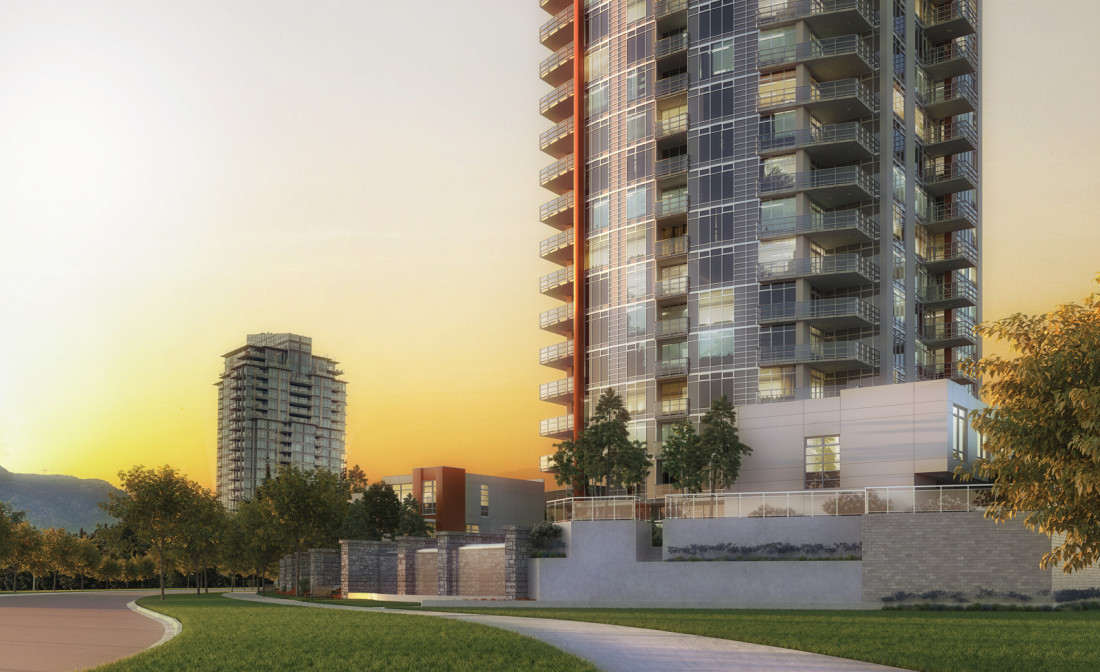 Long-stalled condo project to be resurrected

Kelowna, BC Kerkhoff Construction is pleased to announce that one month ago, it officially assumed full control of the former Lucaya high-rise site in the heart of downtown Kelowna.

Under Kerkhoff’s direction, the project has been renamed 1151 Sunset Drive, based on its street address. Construction on the 21-storey high-rise will begin as soon as possible. 1151 Sunset Drive is the largest concrete tower to be built in Kelowna since the Skye Tower was sold and construction started in 2008. It will include 117 condos and 7 townhomes, designed to provide housing at Kelowna’s most prestigious address, to the local market and those impacted by the rising costs of living in Vancouver.

The site, which has been dormant since 2008, will soon be bustling with activity. Kerkhoff plans to launch its presentation centre by mid-August at the former Waterscapes Sales Centre located at 1001 Manhattan Drive.

“We have heard from many Kelowna residents that they are happy to finally see construction taking place, as they have been patiently waiting for progress at the site for a number of years,” says Leonard Kerkhoff, vice-president of Kerkhoff Construction.

Kerkhoff has built a local and international reputation for reliability, cost efficiency and quality. They built the first high-rise condo in Kelowna, Executive House, in 1980. Recognizing that projects require a wide range of expertise, Kerkhoff embraces a philosophy of collaboration, and has teamed up with other local experts to ensure the project is a success.

Fifth Avenue Real Estate Marketing Ltd. has been engaged to promote 1151 Sunset Drive, as they specialize in marketing and sales of new residential communities for developers throughout BC. Fifth Avenue’s expertise in residential housing includes, master planned: high-rise and low-rise condominiums, townhomes, single family, resort, and mixed use communities. Fifth Avenue President Scott Brown is excited that his firm will be overseeing the program and noted that, “There is a substantial market to draw on for Kelowna both from an investment perspective but also for people wanting to make Kelowna their permanent residence. Furthermore, in the condominiums surrounding this project, a large number of homes are rentals as opposed to owner occupied, so 1151 Sunset will provide a new opportunity for people to make the area their permanent home.”

“We see 1151 Sunset as a milestone development that will set the stage for the consistent and sustainable urban development of Kelowna’s downtown,” says West.

1151 Sunset Drive is being designed by Meiklejohn Architects, one of the leading architectural practices in the Okanagan Valley. Meiklejohn is an award-winning practice with offices in Penticton and Kelowna and is deeply committed to sustainable architecture. In 2004, Jim Meiklejohn became the first architect in the British Columbia Interior to achieve LEED® accreditation. Since its beginning as J.C. Kerkhoff and Sons Construction in 1968, Kerkhoff Construction has built a strong and respected profile, both locally and internationally. From the very first home built and sold in Chilliwack, BC, Kerkhoff Construction has held firmly to the family commitment to excellence, innovation, and integrity, and above all else, client satisfaction. Their expertise encompasses all aspects of design and construction management, guiding complex and diverse projects from preliminary concept to successful completion. Kerkhoff has changed skylines and constructed key landmarks in BC and around the world.