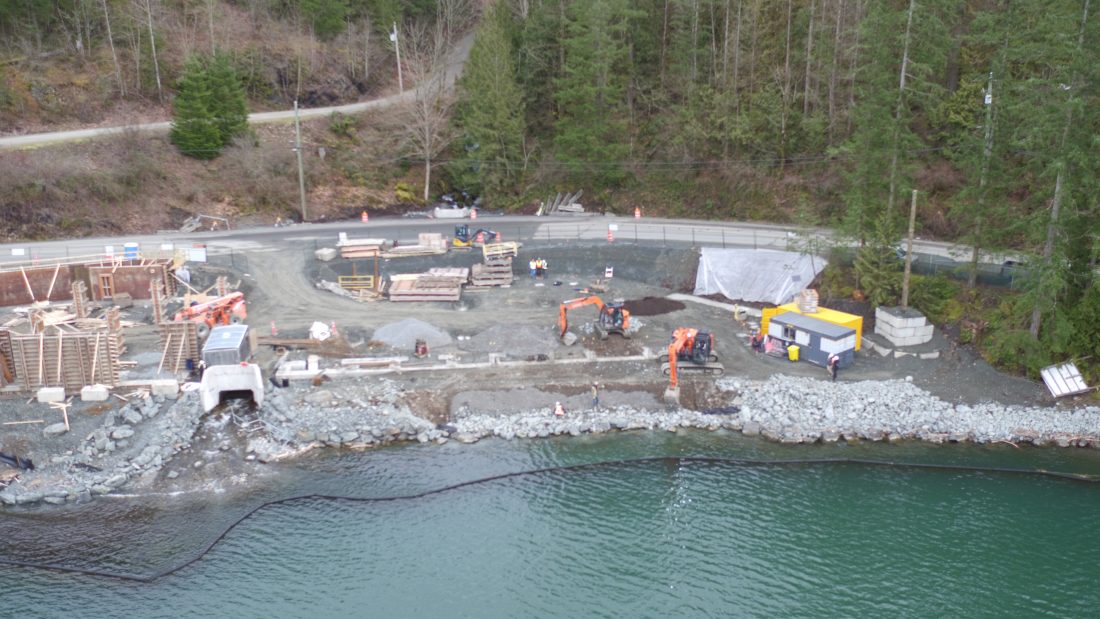 CHILLIWACK, BC – A Lower Mainland developer has been setting an example of environmental stewardship, despite onerous challenges and added costs because he says, “It’s the right thing to do.”

Alture Properties executive vice-president Stephen Duke and his team have moved several hundred fish into Cultus Lake to help maintain the fish population, create new habitat and protect the health of the lake. The undertaking was part of culvert replacement work near Smith Falls Creek.

Alture Properties has acquired land on Cultus Lake for the development of a $23 million, high-end, resort-style residence offering luxurious waterfront accommodation. In preparing the site for construction, an old culvert had to be replaced near the creek, and the fish were in danger of getting stuck and dying. Photo caption: Construction site showing repair of a nearby culvert that was endangering the fish and their habitat.

Cultus Lake supports several fish species, including two unique populations – the Cultus pygmy sculpin and Cultus Lake sockeye salmon – and a wide variety of trout and other salmon. From November 2017 to January 2018, Alture enlisted the help of environmental consultants to save the fish, which were salvaged from the upstream section of the creek.

Cultus Lake has been identified as a crucial element in the Chilliwack River watershed for its role as part of the larger tributary system that connects with the Fraser River. The lake is the focus of the Cultus Lake Aquatic Stewardship Strategy (CLASS), an affiliation of groups and individuals whose common interest is the health and wellbeing of Cultus Lake and its surroundings.

“For millennia, Cultus Lake has provided habitat for a range of fish species, such as its sockeye salmon population and the pygmy sculpin, unique to the lake, and for the surrounding wildlife,” CLASS says. “It has provided resources, breath-taking beauty, relaxation and lore for the nations and generations of humans who have lived on and visited its shores. The more we learn about its ecosystems and its surprising wildlife, the better we can protect it into the future.”

More than one million people visit the provincial park at Cultus Lake annually, including tens of thousands of Lower Mainlanders who welcome the short 90-minute drive that takes them to vacation properties and campgrounds without the hassle of border lineups or ferry crossings.

At about 10 square kilometres in area, the small, deep lake is easily affected by human contact. Pressure from these visits and related activities has to be mitigated to ensure a healthy habitat for the fish and other aquatic life and to maintain the well-being of the small lake and its surroundings.

Among those that have been advising Alture on their efforts are BC Parks, the City of Chilliwack Cultus Lake Parks Board, the Fraser Basin Council and the Fraser Valley Regional District.

Stephen Duke says the project was time-consuming and particularly difficult because it was undertaken during rainy season.

“We had to protect the creek from run-off silt and create a new gravel bed for the fish that might promote future spawning. It took a lot of research and preparation, and heavy rains made the whole task more difficult, but it was the right thing to do.” In addition to the remediation efforts replacing the culverts and moving the fish, the developers are working with local residents on the Lakeside Trail Project – the completion of a man-made walk that follows the lake on its eastern side. The 10k path will be designed for all ages and abilities, allowing nature-lovers to walk, run or cycle, and will eventually be extended to a 25k route around the entire lake. The trail will be informative and educational, as well as beautiful, featuring interpretive First Nations signage celebrating the history and ecology of the lake and its region.

Lakeside Cultus Lake is a luxurious resort-style condominium and marina located on Cultus Lake only 90 minutes from downtown Vancouver. Designed for nature enthusiasts settling into a beautiful retreat and busy urbanites seeking a weekend respite from a hectic city life, Lakeside offers amenities for everyone. However, with only 21 homes available, this private oasis will be home to only a fortunate few. Lakeside is a collaboration between Jim Young, who is from a four-generation family at the lake, and Alture Properties. Together, they have envisioned the residences at Lakeside to be a landmark and legacy for future generations.