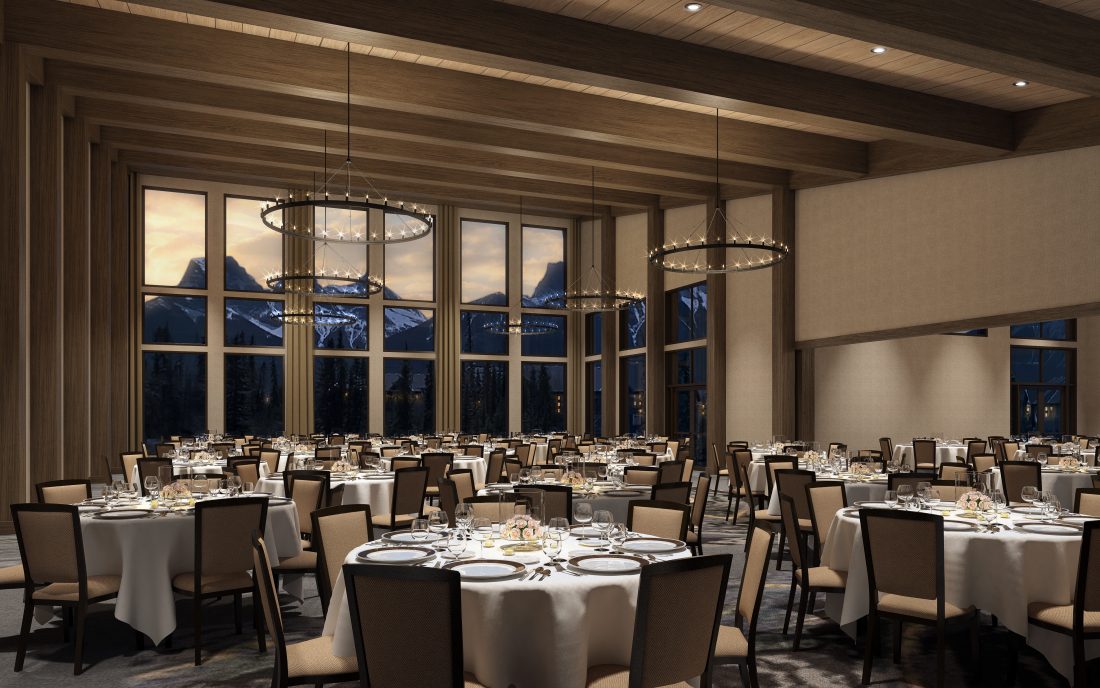 Canmore, AB. -  With the Royal Wedding approaching and Prince Harry set to wed American actress Meghan Markle on May 19, The Malcolm Hotel at Spring Creek in Canmore is offering couples a Royal Wedding of their own.

The soon to be opened Malcolm Hotel at Spring Creek in Canmore is wrapped in Scottish royalty for anyone looking to tie the knot. Situated between two natural-flowing creeks, the hotel features 125 rooms and 6,500 sq. ft. of meeting and banquet space. Its ambiance and design reflect the pageantry, royalty, and heritage of past Scottish kings, as well as Canmore’s own unique history and legacy.

The hotel is named for King Malcolm III who was the King of Scotland from 1058 to 1093. King Malcolm was nicknamed “Canmore”, which is the English translation of Ceann Mór, Gaelic meaning “Big Head” and serves as the town’s name. Photo Caption: A rendering of one of the many event rooms at the Malcolm Hotel and Event Centre
Photo Credit:Clique Hotels

The Malcolm Hotel offers a luxurious venue for any royally themed weddings, but the bride and groom make the calls on dress code. Quirky etiquette for royal weddings – like eccentric hats, disapproval of solid-coloured dresses and morning suits only for men – need not apply. The hotel will have a soft opening in the summer but is now taking wedding bookings for next year and already has more than 20 bookings for the new luxury hotel. Despite its early popularity plenty of space remains.

“There’s a lot of royal connections in the Rockies,” explains Frank Kernick, president of Spring Creek. “From here in Canmore up to Lake Louise, to even the province itself. The Malcolm Hotel offers so much to wedding planners looking for inspired venues.”

Located in the Canadian Rocky Mountains, the hotel is located a short walking distance from Canmore’s bustling main street. The hotel is the first newly built traditional hotel in Canmore in 20 years and is proudly the only four-star hotel in the town. It has all the amenities needed for four-star luxury. An elegant outdoor pool on the mezzanine, hot tubs for the colder months, concierge, 24 hour room service, a fitness centre and a Stirling Grill steakhouse are just some of the amenities featured in the hotel.

The Town of Canmore serves as the gateway to Banff National Park and the main route from Alberta to British Columbia. The Malcolm Hotel’s proximity to downtown Canmore, the TransCanada Highway and various skiing destinations add to Canmore’s proximity to Calgary and its airport, only 100 kilometres away.

“We’re excited with what the Malcolm Hotel brings to Canmore and the surrounding area,” said Stewart Winterburn, VP of hotels and development with Clique, the company managing the Malcolm Hotel. “The Malcolm creates an even more diverse selection of hotels in the town with many venues available for weddings of any size. This special location will have any bride and groom feeling like royalty as the couple and guests are bathed in luxury with unbeatable views of the surrounding mountain scenery”

The two large venues in the hotel include the Edinburgh Ballroom and the Edinburgh Castle, at 4800 and 3700 sq. feet., respectively. Smaller spaces are also available to host weddings, so if the wedding being hosted is a small, private one like Prince Harry and Meghan Markle’s, rooms like the 1100 sq. ft. Edinburgh Holyrood or the 700 sq. ft. Balmoral are available. The most intimate venues are the Stirling and Inverness rooms, at 600 and 500 sq. ft. respectively.

With the hotel’s proximity to downtown Canmore, guests are a short walk away from the ever busy and vibrant main street, featuring a wide array of eclectic restaurants and shops.

To read more on the Malcolm Hotel and Spring Creek, click here.

To view The Malcolm Hotel and Event Centre’s media kit, fact sheet and story ideas, follow the links below.

About The Malcolm Hotel

The Malcolm Hotel is a $43 million hotel and conference centre located in beautiful Spring Creek, Canmore and operated by Clique Hotels. The Malcolm is the first traditional hotel built in Canmore in 20 years. Situated between two natural-flowing creeks, it features four-star service and hospitality, 125 well-appointed rooms and suites, luxury amenities and a 6,600 sq. ft. of event space including the conference centre. Accommodations include 73 double queen rooms, 32 king rooms and 20 suites. Amenities include an elegant outdoor pool with panoramic views of the surrounding mountains from the second-floor open-air mezzanine and fitness centre.