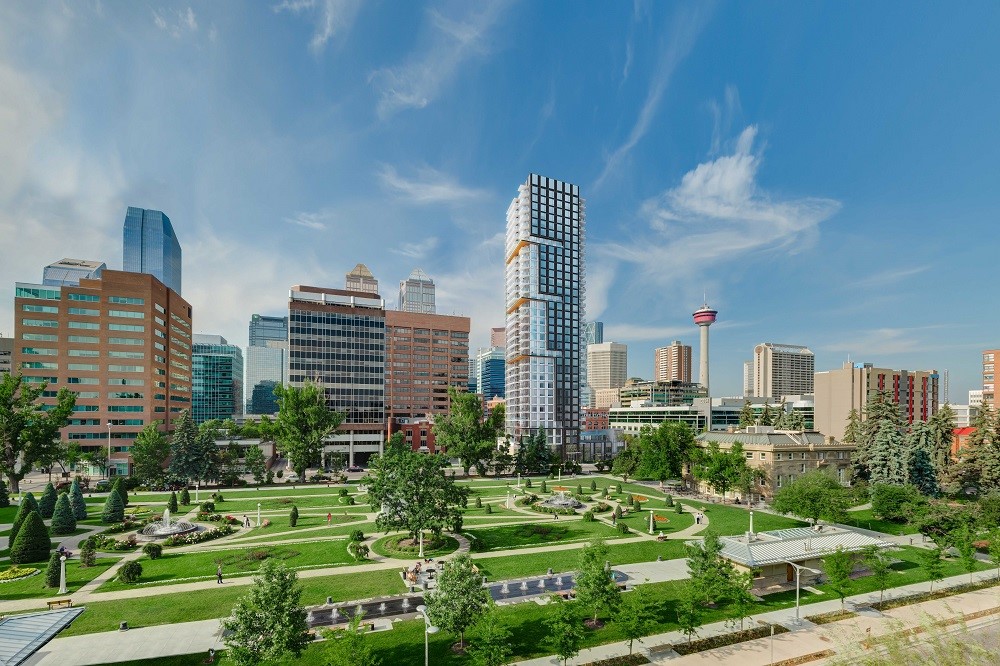 Calgary, AB   Qualex-Landmark™ leads the way in modernizing the Calgary metropolitan area as its sixth new condo tower in the Beltline community will welcome up-to 289 homeowners this Summer. Park Point is a 34-storey condo tower and it anticipates construction completion this August.

It literally is putting an exclamation point on Calgary’s skyline.

Park Point’s architect, Tony Wai of IBI Group says, “We created Park Point to be top heavy, the biggest floor plate is at the top floor, and looks like a big exclamation point when seen from afar with its black and white façade.” Park Point marks a new architectural masterpiece in Calgary as its amazing location at the corner of Second Street and 12 Avenue S.W. is a hotspot for exciting urban living while just across the street is historic Central Memorial Park and Memorial Park Library.

With 80 per cent of the homes sold at Park Point, there still is time to select from the outstanding collection of condos in the tower which feature luxurious interiors and a multitude of five-star resident amenities. The Park Point residential community will integrate modern city living with a relaxed green space environment for residents, allowing them to truly create a work, live, play lifestyle.

With almost 1.9 million Canadians living in condos and over 20 per cent of those being Calgarians*, it is critical that developers deliver on providing residents with amenities and neighbourhoods that create a sense of community belonging and wellbeing.

“At Qualex-Landmark, we believe in delivering innovative and distinctive condo-towers. We strive to create living spaces and neighbourhoods that all residents can be proud to call home. Nothing proves this more than by having our own team residing within our projects” says, Parham Mahboubi, Vice President of Planning and Marketing.

A key part of the innovative thinking delivered by Park Point, is the improved city walkability which is a part of the team’s desire to enrich the downtown living lifestyle. Calgary is the 10th most walkable city in Canada** but is still very transport dependent. To counterbalance this, Park Point gives locals the chance to live walking distance to some of the city’s best locations, such as:

In addition to the above major attractions, Park Point is nestled amongst some of Calgary’s hippest and most popular venues. Providing future residents with easy access to the play lifestyle they are looking for. Residents are within walking distance to a variety of trendy restaurants and bars, such as; Native Tongue Taqueria (2-minute walk), Hop in Brew Pub (2-minute walk), Ten Foot Henry (4-minute walk), Vine Arts Wine Spirits (5 minutes) and Vintage Chophouse and Tavern (3-minute walk) just to name a few. According to Canadas100best.com, some of these restaurants are rated best in Canada and within walking distance to Park Point.

“City walkability and access to major city events is the key to a modern lifestyle. It was an important factor in choosing this location to build the Park Point tower. Our residents want convenience and access to the things they love without the hassle of driving or taking transit,” says Parham Mahboubi, vice president of planning and marketing, Qualex Landmark™.

Designing for new urbanism and developing walkable neighbourhoods is the key to Calgary’s metropolitan future and is what make other cities like New York (most walkable city 2017 in the USA, Canada and Australia) and Vancouver (most walkable city in Canada) great. Walkable neighbourhoods allow communities to become more efficient and improve their quality of life through better environment, health and economy.

In addition to the above, residents will have access to the community rooftop garden and Calgary’s Central Memorial Park – the city’s most historical park and the heart of the wider Beltline community.

Qualex-Landmark™ group, responsible for the construction of more high-rise residential communities in Calgary’s Beltline Community than any other developer, projects account for $400 million in real estate value with over 1,000 homes in the Beltline in just over a decade.

* ‘1.9 million Canadians living in condos and over 20% of those being Calgarians’, Canadian Statistics 2016, Census Report

** ‘Calgary is the 10th most walkable city in Canada’, Walk Score’s 2017 ranking of the most pedestrian-friendly places in the country

The Qualex-Landmark™ group have an extensive track record of both residential and commercial real estate success in the highly competitive Vancouver and Calgary markets. Qualex-Landmark™ group has built its success on its ability to innovate and its dedication to customer satisfaction. Previous projects in Calgary include STELLA, NOVA, LUNA, CALLA and MARK on 10th.

Below is a list of the luxurious Park Point amenities. The amenities featured within the development have been specifically selected to create a cohesive eco-system where residents can actively live their best lives. Residences and their guests will have convenient access to an exclusive range of premium indoor and outdoor amenities located on the second and third floor of the tower podium.