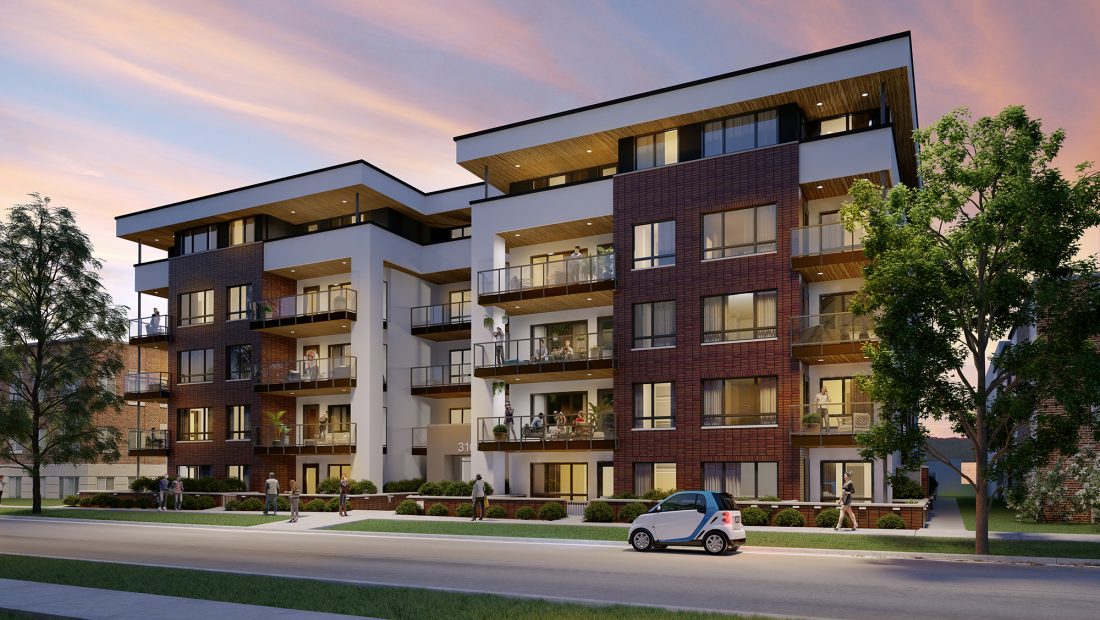 August 21, 2018 – Calgary, AB – A $25 million condominium project launches today in Calgary’s historic Mission neighbourhood. Matrix (320 – 19 Avenue Southwest) is a new five storey condominium development, which will provide 67 new homes to the area as the popularity of inner city living has not waned.

When fully built and sold out, Matrix will be a $25 million development from Mission 19 Ltd., led by developer Harold Sicherman. New multi-family projects like Matrix are rare in this neighbourhood. Harold’s recent Mission project, District,  launched in 2013.

So why build now? “I have a lot of faith in Mission. I like the area and the cohesiveness,” says Harold Sicherman.

That faith in Mission is evident, supported by Harold’s 20 year track record of development work in the neighbourhood. “I believe I have done more development in the area than anyone else.” Harold has also used some of the same suppliers for the last 20 years, resulting in continuity of quality and service.

The latest City of Calgary Census shows the city’s population is still growing, with an increase of 1.69 percent from April 2017 to April 2018. The number of housing units, both existing and under construction, continues to rise. Despite that, the number of vacant dwellings decreased by 4,145 units.(Source:https://newsroom.calgary.ca/city-releases-2018-census-results/)

Mission is a vibrant area with an engaged community association and a young population. According to City of Calgary stats, 42% of Mission’s population is between 25 to 34 years of age. Mission has evolved from its origins as a French Catholic settlement into a walkable urban hot spot, close to the downtown core and a plethora of cafes, restaurants and bars. Originally known as Broadway Street, 4th Street Southwest is now one of the city’s most popular main streets.

The location of Matrix, is just off the juncture of 4th Street and 17th Avenue Southwest (another of Calgary’s popular main streets which is currently experiencing a revitalization). The specific address at 320 – 19 Avenue Southwest, gives Matrix a walk score of 96 and a bike score 100, making it one of the most walkable neighbourhoods around. Residents in Mission can walk to an average of 18 restaurants, bars and coffee shops in five minutes. (Source:https://www.walkscore.com/score/320-19-ave-sw-calgary-ab-canada)

Gravity Architecture, a local firm, is very experienced with multi-family developments. The firm was chosen to take on the task of combining new and old in the established Mission area. Matrix offers 67 homes; a combination of one-bedroom, one-bedroom plus den, and two-bedroom units ranging from 612 to 868 square feet (56.9 to 80.6 square metres).

Calvin Buss, President of Buss Marketing is part of the Matrix team. He says Matrix offers a unique value in the area. “The level of luxury available as standard features, make Matrix the best value in the inner city.” The bathrooms feature Valley fixtures, spacious storage and porcelain wall tile. Kitchens supply a gas cooktop and full-size stainless steel appliance package. Owners will also have heated and secure underground parking, storage, as well as separate bicycle parking and even a dog wash in the parkade.
Twelve of the units are listed under the $299,990 mark, making them particularly attractive to inner city buyers. The top floor is designed to have a penthouse feel, with those units topping out at $471,350.

The Matrix sales centre is now open. Interested parties can register at www.Matrixliving.ca to receive new information as it is released.