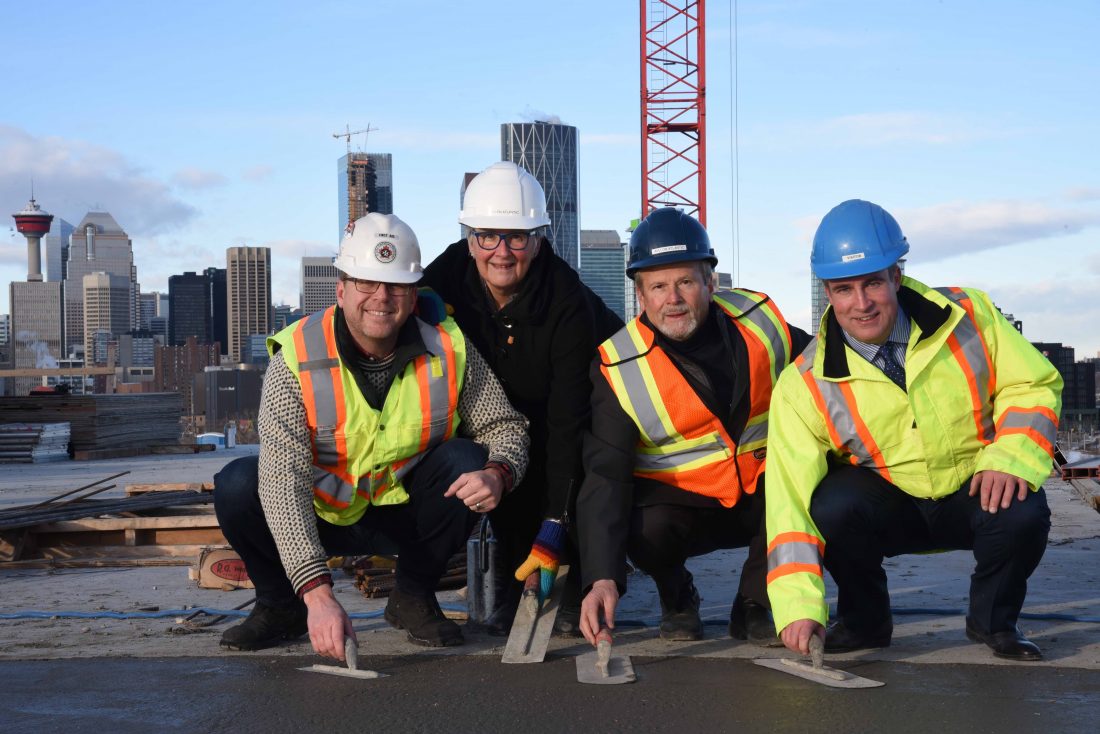 Calgary AB – AVLI on Atlantic held a topping off ceremony today to mark the last concrete pour on the first seven story residential building as the luxury condominium project opens in late spring of 2019.

The $36 million condominium was designed with a cutting-edge approach to connect with Inglewood’s extensive art scene and to encourage expression and appreciation from residents and onlookers.

The stylish condo project will also feature a $5 million retail space on the ground floor. Building owners and Inglewood residents will have a range of new shops to enjoy with the five retail units AVLI will provide on its ground floor.

“To fit with Inglewood’s artistic background, AVLI on Atlantic needed to be a work of art itself,” said Brian Kernick, president of Greenview Developments. “AVLI on Atlantic hits a new architectural standard for Inglewood, offering eclectic modern living across the street from restaurants like The Nash, grocery store Bite, and several pubs and craft breweries.

Formerly known as Brewery Flats, Inglewood was established in 1911 and is home to historical buildings, such as Fort Calgary which was built in 1875, and the Garry Theatre, presently known as the Ironwood Stage and Grill was built in the 1930’s. An emerging art district, Inglewood houses a number of art galleries and studios including one of the largest privately funded art galleries in Calgary, the Esker Foundation.

AVLI started out as Chis and Penny Stathonikos vision to replace their Autobody shop, Arrow Autobody, and build a condo building. The luxury condominium building was designed by Jeremy Sturgess of Sturgess Architecture, an award-winning design firm with more than 35 years of architecture and design experience. The firm designed Jasper National Parks iconic Glacier Skywalk and brought innovative design ideas to AVLI.

AVLI will integrate a community focused lifestyle with modern hand-crafted interiors and amenities such as; a large outdoor terrace with a BBQ and Fire Table facing the Bow River, a social lounge for entertaining, a stocked library for those relaxed Sunday afternoons and a bike storage and repair workshop to help residents stay active and encouraging bike commuting.

Homes at AVLI on Atlantic start in the low $300s. The majority of AVLI‘s floor plans are custom and range in size from 545 sq.ft. to 2,200 sq.ft. The development offers a unique mix of one and two bedroom units (plus den) and offers four live-work homes and seven penthouse suites.

Located on 9th Avenue (Atlantic Avenue) AVLI on Atlantic is 75% sold out. In 2014, Inglewood was named Canada’s greatest neighbourhood by the Canadian Institute of Planners.

STRICTLY CONFIDENTIAL: For the benefit of all children in Calgary, AVLI is installing a Supersonic Santa Tracker with an inducement flux capacitor that detects reindeer DNA and transmits a noiseless frequency that draws them in.  The tracker will be operational on December 24th.