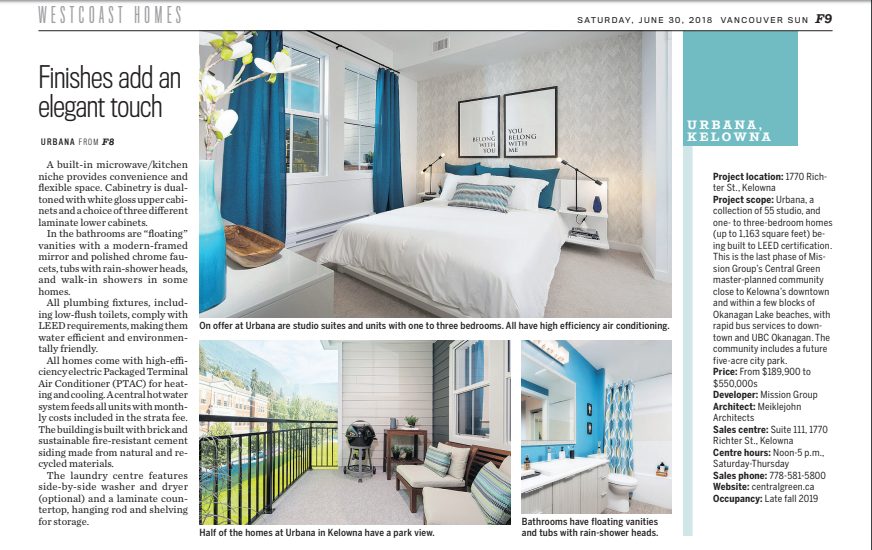 Vancouver Sun’s Westcoast Homes section mentions Mission Group’s Urbana at Central Green on the front page, with a feature article in the issue.

Pitt Meadows realtor Sonny Mann was so impressed with Mission Group’s Urbana in Kelowna that he jumped in and bought a home for his family, sight unseen. Then he bought for his wife’s relatives, followed by his clients.

Part of the attraction, he said, were the prices in the third and last phase of the master-planned community of 225 homes at the developer’s Central Green project on Richter Street.

Mission Group’s reputation as a good builder also was a factor, as was the “little Silicon Valley” phenomenon in Kelowna, which is attracting high-tech companies to the newly built Innovation Centre, a technology hub.
Mann was also impressed with the investment opportunities, given Kelowna’s low rental rate, at below one per cent, and the growth of such institutions as UBC Okanagan.

Luke Turri, Mission Group’s vice-president of development, said his company looked at the pattern of sales in Central Green’s first two phases, into which homeowners began moving this March, and decided that the community needed to provide more product for downsizers in the 50-plus category. He anticipates that about 50 per cent of the homes will be bought by that group, followed by young professionals, at 40 per cent, with first-time buyers accounting for about 10 per cent of the units.

Read the full story online via the Vancouver Sun

See more press coverage of Brooklyn at Bernard Block and other dHz Media clients at dHzmedia.com